“Passion ignited my creativity,” Janel declared. ”And it has allowed me to express myself in ways I never thought possible.

People are becoming environmentally conscious. They’re looking for holistic alternatives and are becoming more interested in the Metaphysical Realm. They’re searching to explore their lost traditions, share their gifts and be part of a community without judgement. I provide all this and more. Nothing gives me more joy, than when a client comes back to voice how much my product actually worked in helping them to manifest their vision.

Born in Wilmington, Delaware to African American parents before moving to Atlanta, Georgia, I realized, I was born with natural gifts, one being artistic. At a young age, I realized, I had other natural gifts. I am a Seer, Intuitive, Medium and Clairvoyant. I repressed my gifts for decades until I met someone just like me who helped in allowing my gifts to flourish. I have bern an eclectic practitioner for the past 20 years but it wasn’t until 5 years ago when I got in spirituality heavily. I was when I converted to Catholicism from the African Methodist Episcopal Church (A.M.E). Spirituality and the church have distinct similarities and profound differences. As Catholicism brought me closer to the teaching of the Bible from creations; it revealed its integrations with slavery unraveling the traditions from creation known as the ATR’s— African Traditional Religions, which my ritual candles are founded upon.

During the pandemic, metaphysical stores had hardships bringing candles to the United States through customs. I had been told numerous times that I was very powerful. So, I decided to make three candles and sell them online. By my surprise, the customer’s demand turned these 3 candles into a 50 product line with 97 variants by the fourth month. As well as a physical cart in a prestigious Mall within Atlanta, GA. A Metaphysical store in the mall was dire. However, a store with one practitioner who creates candles, designs them with crystals and dried herbs that aesthetically beautiful to fit in any home decor and actually works is the real attraction.

Sadly, the pandemic isn’t over. Thus, the world is changing everyday causing instability and inconsistencies in everyone’s life. Therefore, I was forced to close my brick and mortar store. But be assured, I’m still here for YOU. In the future, I plan to join a community, become and herbalist and further my knowledge and creativity to bring quality to my products, clients and the metaphysical community.

Let customers speak for us

Most beautiful candles that I’ve ever dealt with.
super excited to shop from this store Again
My Bridesmaids candles turned out to be absolutely stunning.,also customer service was excellent!!!!!
I highly recommend 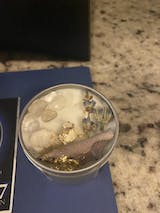 This is one of my favorite spelled candles. Its affordable and has amazing energy

This soap is excellent for moisturizing and healing dry and cracked skin. It leaves the skin glowing and healthy. I can highly recommend this product and any other products from alchemy7. You wont find anywhere else that makes all the products 100% natural. You will never worry about having non natural irritants in this soap. I have been using it for the last year or so and its the only thing that helps my dry skin clear up and become smooth once again. Thank you alchemy7 you will always have my business :)

I bought several of your soy candles as gifts and kept one for myself- the red hot apple cinnamon. Loved it. Great fragrance.